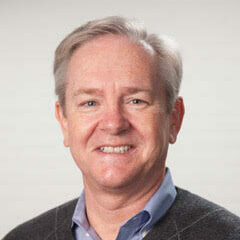 Kevin Wilde serves as an Executive Leadership Fellow at the Carlson School of Management, University of Minnesota, where he teaches applied leadership in a number of graduate courses. His current research topics include leadership coachability, executive derailment and contemporary talent development. In 2015 he concluded a 34-year corporate career in leadership and talent development at General Electric and General Mills.

During his time at General Mills, the organization was consistently recognized for its innovative development work, highlighted by Fortune’s #2 ranking as one of the best companies in the world at leadership development, #1 listing by Leadership Excellence magazine, #1 Global Learning Elite ranking and Training magazine’s “Hall of Fame” designation as a top company for employee development. In 2007, Chief Learning Officer magazine selected Kevin as CLO of the Year.

Kevin continued to be an active contributor to the leadership and talent development profession with business advising and writing. His advisory work includes the Institute for Corporate Productivity (i4cp) and GP Strategies. In 2011, his first book, “Dancing with the Talent Stars: 25 Moves that Matter Now” was published by Human Capital Media. In 2015, he served as editor of “A CLO Leadership Reader: Chief Learning Officer Magazine’s Best for Today’s Learning Leader.” His writing for Talent Management received a national award for editorial excellence from the American Society of Business Publication Editors. His work has also been published in over a dozen books, including “Coaching for Leadership” and the “Pfeiffer Annual on Leadership Development.”

Supercharge Your Learning for the Future of Work

HRCI has pre-approved this activity for recertification credit toward the aPHR®, PHR®, PHRca®, SPHR®, aPHRi™, PHRi™, GPHR® and SPHRi™ certifications. The content of the activity submitted has met the criteria of the Approved Provider Program.